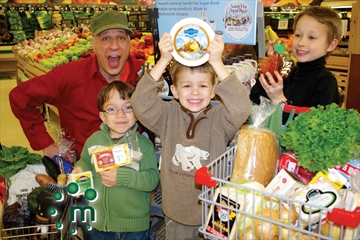 CAMPBELLFORD — Singer/songwriter Andrew Queen will give a Family Day concert at the Aron Theatre to promote his new CD that touts the virtues of buying food locally. It’s also a fundraiser for Isaac McFayden, between Mr. Queen and his two sons, Lewis and Ivan. Isaac’s parents established a foundation to raise money for research to treat and cure the rare disease their son has, MPS VI. January 2012
Northumberland NewsTRENT HILLS — Andrew Queen is a man on a mission, two of them in fact, and they’ll come together Feb. 20 at the Aron Theatre when the popular children’s entertainer performs songs from his newest release, “GROW.”

One goal he’s set for himself is to get kids singing songs about eating healthy food grown locally, the other is to raise money for a Trent Hills family’s son who has a rare, progressive disease, MPS VI, caused by an enzyme deficiency.

All proceeds from the sale of tickets to the Family Day concert and a portion of the CD sales will be donated to the Isaac Foundation that Ellen and Andrew McFayden set up after their son Isaac, now seven, was diagnosed with MPS VI in October 2005. The registered charity supports research into innovative treatments and potential cures for Maroteaux-Lamy syndrome, which can stunt growth, impair vision, cause stiffness in joints, affect breathing, and enlarge the liver or spleen.

“GROW is an album about community-building and acting local,” Mr. Queen said in a press release. “The McFaydens have demonstrated such dedication, grace, love and strength in the face of unbelievable challenges. I can’t think of a better way to celebrate Family Day and my album release than recognizing this family and supporting their research efforts.”

Mr. Queen raised money for local causes at two previous Family Day concerts; the first was for the music program at Kent Public School, the second for improvements at Kennedy Park, he told The Independent.

His wife, Karen Stille, suggested The Isaac Foundation this time out. The McFaydens were one of the first families the couple met when they moved to Trent Hills seven years ago, and a benefit they attended last “was really a moving event,” he said.

Ms. Stille also wrote most of the lyrics for the songs on the new CD.

“We’ve turned into a songwriting dynamo,” said Mr. Queen, whose second CD, “Too Tall,” won the 2010 Canadian Folk Music Award for Children’s Album of the Year and received a Parents’ Choice Recommended Award. One of its songs, “Big Troubles for Little Red,” placed second in the 2009 International Songwriting Competition.

“GROW” promotes buying local and supporting local family farms, Mr. Queen said. Its point of view is captured in a new music video that will be premiered at the concert. “Just Down the Road” was filmed and produced by Stephen Rapos of Fiddlehead Studios in Warkworth.

“The big message is to get kids thinking about where their food comes from and thinking about eating healthy,” Mr. Queen said. All kinds of fruits, vegetables, meats, cheeses, breads, butter, and preserves are available “within a short drive,” and the area people responsible for their production deserve to be supported.

“It’s a good feeling,” he said. “You can start to feel a little control over the food that’s coming onto the table.”

Tickets can be purchased for $5 at the Aron Theatre, Kerr’s Corner Books, The Grindhouse CafÃ© and the Campbellford-Seymour Community Foundation, or for $7 at the door. To learn more about Mr. Queen and The Isaac Foundation, visit www.andrewqueen.ca and www.theisaacfoundation.com.