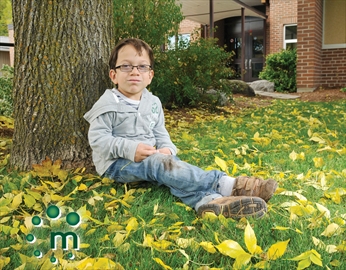 TRENT HILLS — Andrew and Ellen McFadyen are prepared to take on big pharma to raise $1 million for a clinical trial of a drug that could prove life-changing for their oldest son.

Isaac, eight, has an extremely rare disease, MPS VI, which requires that he receive treatment for an enzyme deficiency one day a week at Toronto’s SickKids hospital.

The enzyme replacement therapy he began five years ago has slowed down the progress of the disease, which stunts growth, stiffens joints, affects the heart and airways, and shortens lifespan.

There is no cure, but the McFadyens believe one is close at hand. Proving it, however, will take $1 million. Their faith is based on “positive results” from ground-breaking research done in the U.S. that was funded by The Isaac Foundation.

The Meyersburg couple established the foundation in 2005 to raise money for research into innovative treatments and potential cures for MPS VI and other MPS diseases, and to increase public awareness about the disorders.

“One of the projects we’ve been funding for the last three years out of New York City is reversing all of the symptoms of this disease in lab animals; it’s as close to a cure as we’ve ever been,” Mr. McFadyen said. “Now we just need to get it into human clinical trial and ensure the safety is there for our children, which we’re very, very confident it is.”

The drug under study is an oral anti-inflammatory that is already used to treat bladder inflammation and has been approved by Health Canada and the Food and Drug Administration in the U.S.

“We’re incredibly hopeful that this is a turning point in the lives of all kids suffering from MPS,” Mr. McFadyen said. “It’s not a huge trial that needs to be done; probably it would take nine months to have good data.”

To raise the capital required, he conceived Project One Million, which is “very ambitious” but it’s a goal he’s confident can be achieved.

“We’ve set our sights high and we’re going to get it,” he said.

He’s pinning his hopes on getting the American pharmaceutical company that manufactures the anti-inflammatory medication to underwrite the cost of the clinical trial. So far it has refused, but that’s not stopping Mr. McFadyen, whose extensive lobbying persuaded the provincial government several years ago to agree to pay for Isaac’s enzyme replacement therapy, which costs about $400,000 annually for the medication.

In the last two years he was also successful in helping to persuade the Ontario and Saskatchewan governments to extend the same benefit to two other children with MPS VI.

“This product has potential to save thousands and thousands of children’s lives (around the world) and I’m not going to rest until they ensure that product gets effectively used for those kids,” Mr. McFadyen said.

“They know we’re fighting against time,” he said. “I will not sit idly by.”

A teleconference involving researchers at the pharmaceutical company and those Mr. McFadyen has been working with is scheduled for Oct. 11.

“They’ve made no promises, but it’s a start,” he said.

Cobourg gala to raise money to find a cure

TRENT HILLS – Project One Million is more than about raising a huge amount of capital, “it’s a million conversations, it’s a million people talking about rare diseases,” and making them aware “they can make a difference,” Andrew McFadyen said.One way they can show their support is to attend the third annual Gala for a Cure, which includes dinner, wine tasting, a silent auction, and entertainment by Juno Award-winning musician Ron Sexsmith. The fundraiser will take place Oct. 13 at the Best Western Convention Centre in Cobourg.

Eight-year-old Isaac McFadyen, who has been taking piano lessons for a year, will play a number and present a Lifetime Impact Achievement award to Dr. Lilla Simonaro, whose research has fuelled optimism a cure has been found.

Tickets are $100 per person (a charitable tax receipt will be written for $60). They can be purchased online atwww.theisaacfoundation.com or by phoning 613-328-9136.