Every second we get to share with those we love in this beautiful world are important.  Every memory made, every laugh, every tear.  Every hand held, every hug given and received.  They all matter.  In his short 20 years in this world, Lucas knew just that, and he made each and every moment special - for him and for others. 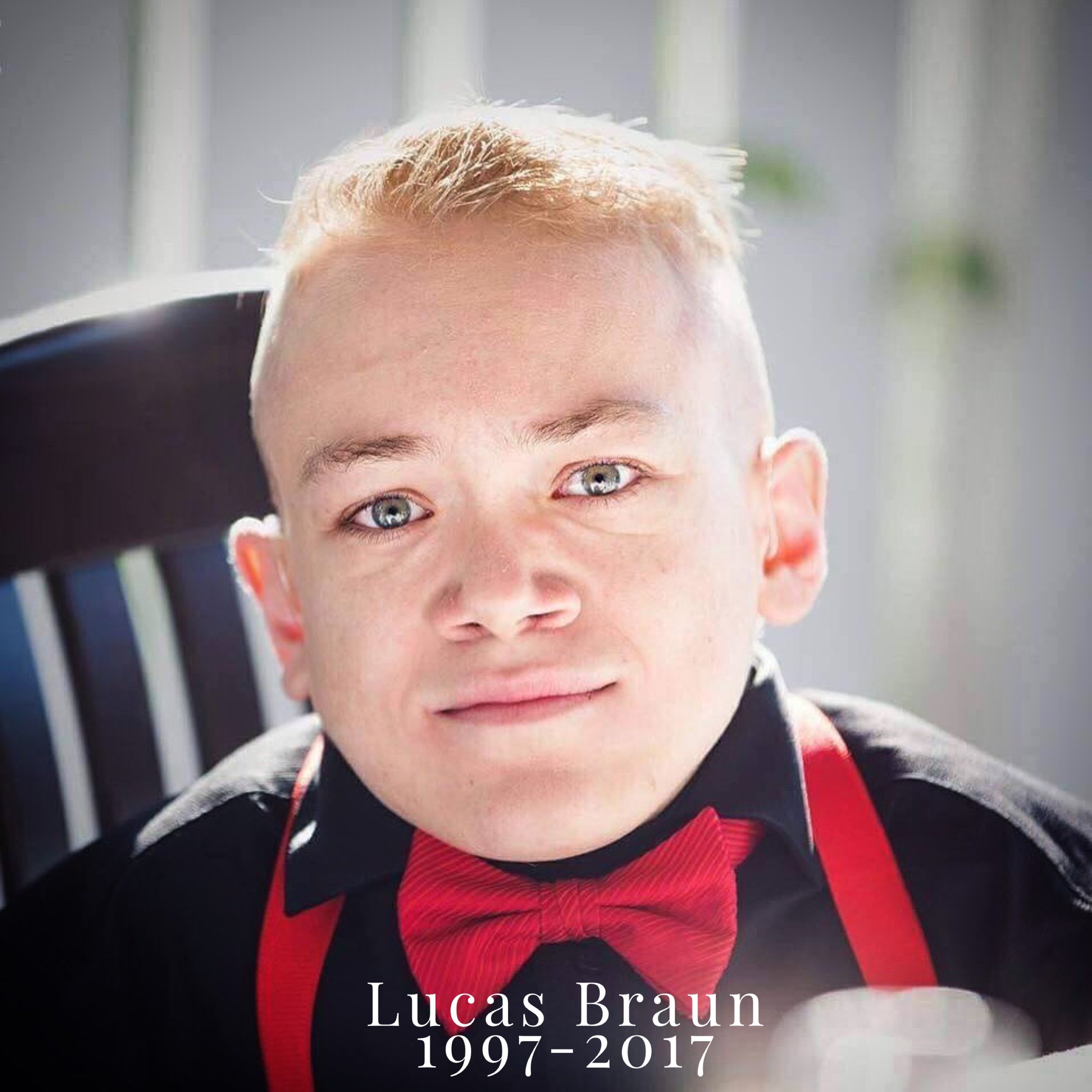 Luke battled MPS with bravery and strength.  He battled stoically.   He battled hard.  He handled every one of those battles with grace and determination, every setback as a new challenge, every painful situation as a necessary road to travel on the way to greater strength.  He was in and out of hospital for more surgeries than anyone should have to endure, though always smiling, always brave.

Lucas battled MPS and it was a part of him.   But he didn’t let it define him.  In my minds eye today, tomorrow, in twenty or thirty years down the road, it won’t be the disease I think about when I remember Luke, it will forever be his grace and dignity, his strength and bravery that comes to mind.

Luke was one of the bravest kids - the bravest people - I’ve ever met.  Patient #1 for the Canadian Clinical Trial of Vimizim - the life-saving investigational drug that was being developed for patients battling MPS IV (Morquio Syndrome) - Luke faced the unknown head-on.  He bravely put himself in harms way to help test a treatment that had the potential to save many lives, to help slow the progression of the disease in patients, to give them a life-boat until a cure could be found.  He bravely faced the unknown to give others a chance; he faced it to provide Hope.

There was a celebration when Vimizim was approved here in this country, but Luke still had his concerns.  The drug was approved, in large part due to his sacrifice and his bravery, but it still wouldn’t be available for patients across the country who needed it.  When Lucas found out I would be on a crusade to ensure the drug’s availability for those most in need, he told me I needed to be successful because he did the trial to help others, not to watch governments say no to access for everyone.  As I fought my battle with governments to gain that access for others, he selflessly told me that “If other patients can’t have the drug, I don’t want it either because I didn’t do this to be selfish, I did it to help everyone.”

Luke was like that - he always thought of others first.

It will always be Luke’s bravery that I remember. It will be his selflessness.

It will be his eyes - those eyes! - and his smile.

It will be his laughter, his wit, and his humour.

It will be the caring and compassionate way he treated others.

When Luke was facing this recent surgery, he was afraid.  But him being afraid didn’t stop him from checking in on my son, Isaac, during his own surgery and recovery, ironically the same surgery Luke was facing a few weeks after Isaac’s.  Luke would text to ask how he was doing, he’d post messages of love and support on Facebook.  He’d think of Isaac, first, and push aside his own fear.

And his Mom, Debbie, he always put her first.  The love he had for her was unending and unconditional.  He was proud to be her son, proud to have her by his side during his MPS journey.

As parents raising children battling life-threatening illnesses, we often do everything we can to ease their burden, to find solutions.  We scour the internet for news about the disease, we look for alternative treatments and therapies, we hope against hope to alter the path our children are on.  Luke often helped ease that burden that only a parent can feel, and he did it often.  Once, while he found Debbie again scouring the Internet, he asked her what she was doing.  Debbie replied that she was reading about Morquio Syndrome, to which Lucas categorically stated “Don’t try to fix me, Mom.  I’m not broken.”  It was a quick comment, a small statement telling her how he felt about his disease.  But that small statement made Debbie realize that he was right - he wasn’t broken.  MPS was a part of Luke, and it didn’t make him broken. Debbie held onto those words throughout Luke’s life, and she recalled them during his final days with us.  And those wise words spoken all those years ago by a 5-year-old version of Luke still rang true - Morquio never meant that he was broken.

My favourite story that Debbie often tells me about Luke was when he turned 16.  Again, as parents facing what we face for our children and their future, we worry about what any given day, what any given year, can bring.  When Isaac was diagnosed, we were told he may not live to see his teenage years.  Debbie was told that Luke may not see his 16th birthday.  Luke knew this and on the morning of his 16th birthday, he walked into his Mom’s room, woke her up, and said “Good Morning, Mom.  I’m still here.”

To me, that’s the most heartbreaking and beautiful statement one could ever hear at the same time.  Heartbreaking because he was clearly sharing the same burden as his Mom, but beautiful because he made it and could share that beautiful moment with the person he loved most in this world.

He felt the same about his brother, Zane as well, his ever present partner as they battled MPS together.  I know Luke cared deeply about Zane, and saw the strength in Zane that we all saw in him.  Zane followed him into the Clinical trial.  They fought the disease together.  They helped save others - together.  The love he felt for Zane was matched only with the love he felt for his sisters, Nicole and Lexi, and the love he had for Jay, his step-father.   All of them will be forever changed without Lucas in their lives.  But they will forever be better people because of  the time they had with him, and because Luke made everyone strive to be better people through the example he set, and the love he gave.

When my friend Justin passed away last year, I wrote a blog in his memory as well.  In it I talked about another friend, Stuart Mclean, who used to have a radio program called the Vinyl Cafe.  Stuart once wrote a story called Love Never Ends.  It’s one of the most beautiful pieces of writing I’ve ever read, and I re-read that story often when I’m struggling with difficult things in life.  It’s the story of an older lady coping with the loss of her husband, her life partner and best friend.  After his passing, she finds a framed photo of him that he hid for her before he died.  On the back is written  (from Corinthians 13:7):

Love is patient, and love is kind. Love is not jealous or boastful. It is not arrogant or rude. Love does not insist on it’s own way. It is not irritable or resentful. It does not rejoice in wrong, but rejoices in the right. Love bears all things, believes all things, hopes all things, and most of all, Love never ends.

What I wrote then about Justin and his family hold true for Lucas and his.  As much as Lucas was loved, he loved Debbie, Zane, Lexi, Nicole, and Jay just as much.  And the love they shared for each other won’t end with his passing.  That love will never end.

Every second we get to share with those we love in this beautiful world are important.  Every memory made, every laugh, every tear.  Every hand held, every hug given and received.  They all matter.  In his short 20 years in this world, Lucas knew just that, and he made each and every moment special - for him and for others.  So as I say goodbye to you, Lucas Braun, someone I was proud to call friend, someone who helped guide what I do, someone I know is a hero in the truest sense of the word, it’s not just your grace and dignity, your strength and determination that I’ll remember.  It’s not just your selfless nature, your eyes and your smile that I’ll remember.  It’s not just your laughter, your wit, and humour that I’ll remember, nor will it only be the compassion you had for others.

It’s all of it together that I’ll remember, along with the reminder to make every moment count.  I know you’ll want that for me, and you’ll especially want that for your Mom, for Jay, and for Zane, Lexi, and Nicole.   I know you’ll want us all, along with everyone who was lucky enough to have you in our lives, to love those we love stronger, to hold those who are close to us closer, and to cherish every laugh we get with each other, every tear we shed together, and every memory we share with others.  You’ll want us to cherish it all, to slow down and take it all in.

Along with everything else that made you, you, that’s the legacy that you’ve left with us.

Rest in Peace, Lucas.  Thank you for all you gave this world.