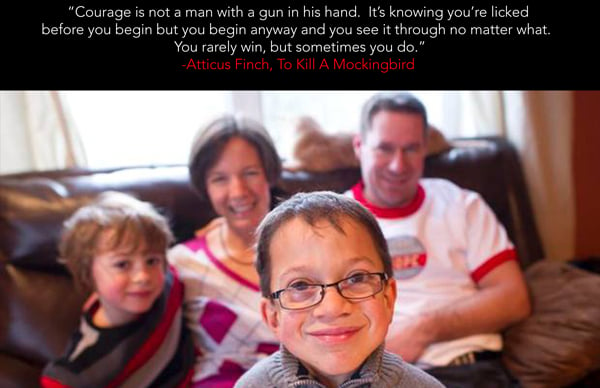 At night while snuggling with Mom, he’s been asking if there will ever be a surgery that he doesn’t wake up from.  Quietly with me, he’s asking how people who are paralyzed from the waist down use the bathroom.

Good lord, I don’t want him to be afraid.

I’ve often said the most difficult thing about this journey has been being forced to see my own son’s mortality each and every day.

I was wrong.  The most difficult thing is watching him see it in himself.

It’s heartbreaking.  He’s carrying a weight that’s impossible to bear, but he’s doing it bravely and gracefully. And, for the most part, with a smile on his face.  That weight, however, has been more evident these past few days, especially during his visit with his hero last night.

As many of you know, Isaac’s mobility has deteriorated rapidly over the past 6 weeks.  Last Tuesday, he went in for some more testing and was admitted to the hospital so they could find the root cause of things.  In November, he had his second spinal cord decompression surgery, a nerve wracking experience, even knowing he was in the best of hands. Immediately after the surgery, Isaac’s mobility improved greatly - he was walking better, was more loose.  Today, however, he can’t walk flat on his feet, his balance is gone, he’s stiff and sore.  He’s been waking up numb from the waist down, getting tingling down his legs and inside of his foot.  If he raises his arms, he gets a jolt down his leg.  During one test last week, he couldn’t tell if the doctor was moving his fingers up or down while his eyes were closed.

Hospital results showed that the surgeons need to go back in and do another spinal cord decompression in the same spot, which will hopefully relieve these new symptoms and help him regain his mobility.  He’s been fitted for a neck brace, and surgery will take place this Thursday at Sick Kids.  He’s in the best hands - Dr. Jim Rutka has been his neurosurgeon since he was a baby.  Dr. Cengiz Karsli has done all of his anesthetics.  We trust them both fully.  Joining both of them will be Dr. Drake, the chief of neurosurgery at Sick Kids, and Dr. Zeller, the chief of orthopaedic surgery.  The best will be there to look after him.

Throughout his entire battle, Isaac’s always kept a positive attitude and has been more brave than anyone I know.  He still is today, as well.  Being fitted for his brace saw him laughing and singing - he was smiling and making us smile through our tears.  At the same time, however, he’s grown more afraid of things.  More exhausted and tentative.  He’s not able to cook with his brace on, and hasn’t updated his website in a few weeks.  At night while snuggling with Mom, he’s been asking if there will ever be a surgery that he doesn’t wake up from.  Quietly with me, he’s asking how people who are paralyzed from the waist down use the bathroom.

Good lord, I don’t want him to be afraid.

We tried to get him out to see his hero, John Mayer last night.  John kindly offered to quietly sneak in to the hospital to visit Isaac if it looked like we couldn’t make the show.  In retrospect, we probably should have taken him up on his offer - spending a week in the hospital has left him exhausted and drained on top of the stress and worry he’s under. However, we thought heading down to the show would be a good outing for us all, and seeing John would raise his spirits a lot. 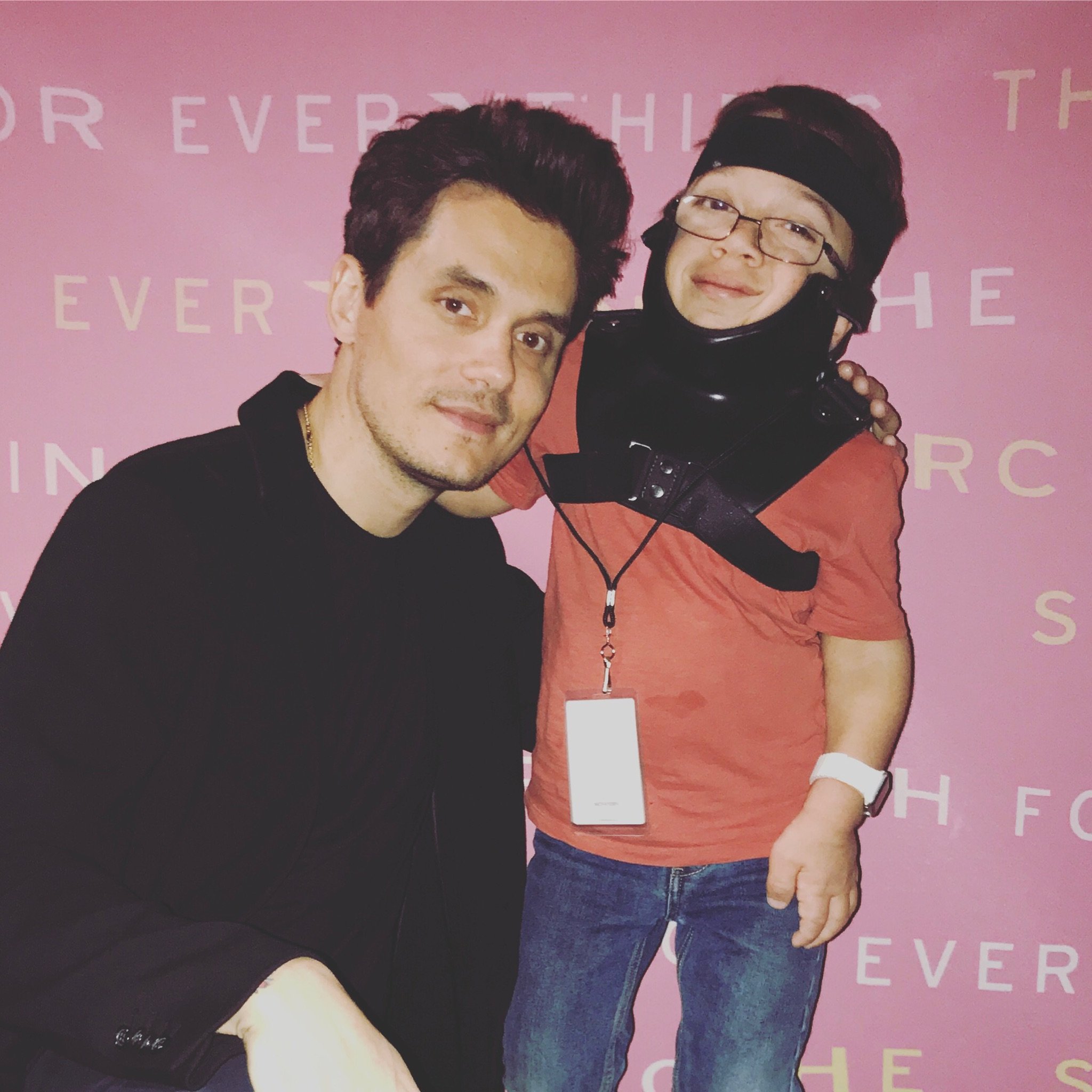 And it did.  He loved the show (he especially perked up with Shawn Mendes took to the stage with John!)  But it was different, too.  Isaac wasn’t as talkative during his visit with John as he usually is, or laughing and joking.  He had a brave smile on his face, but the exhaustion was noticeable.  His discomfort in his brace was clear.  Isaac didn’t ask John to play a song (he regretted it after our time with JM was over and tried to text him in time to hear a song, however), and he didn’t want to chat about the new music much.  He just wasn’t himself, and hasn’t been of late, which, of course,  is completely understandable. 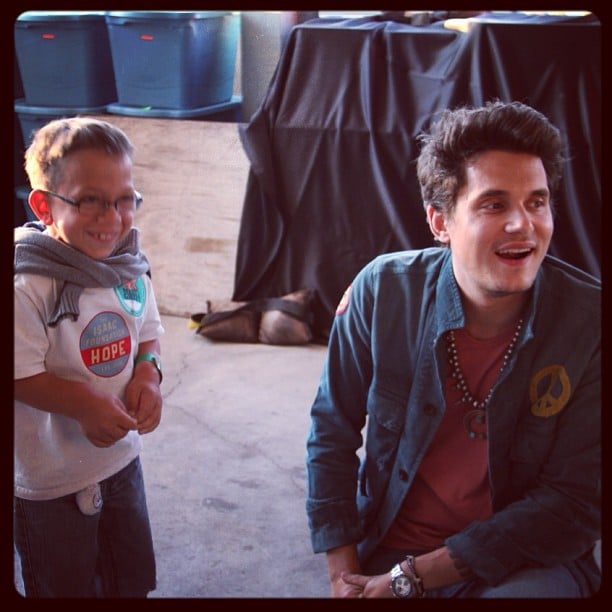 But last night drove it all home for me.  This is more real now than it ever has been before.  I was already broken, but watching him these past few days has been painful and heartbreaking.  I told Ellen how tough that was for me to see, and how tough it was for me to see people posting photos of their last time together compared to this one.  Last visit was all laughs and giggles, free spirited and stress free.  Ellen said she knows people like John will understand and that it makes this experience almost as real for those around us as it is for us.  I know his classmates understand.  I know his teacher understands, too.  And it will make them face that this is tough, but also allow them to celebrate with us once this is over and he’s back on the way to better health.  And Ellen’s right (she always is!)

Driving home today, Isaac told me he just wants this all to be behind him.  He doesn’t want to visit his classmates until this is all over, until he’s feeling better again.  He can’t wait for Thursday and is heading into that surgery with all the grace and determination one could ever hope for.  He’ll get there - we’ll all get there.

Thanks, as always, for dropping in on our update.

We’ll update after surgery on Thursday.

P.S. - We rolled back into home an hour ago.  Isaac’s playing some Minecraft and we’re going to snuggle up and watch a movie together this afternoon.  Before he settled into his gaming, he did take some time to look at his brand new guitar that John gave to him as a gift.  He gave one to both Isaac and Gabriel, each signed with a special message - both meaningful and sweet.  Isaac loves his, and he perked up a bit last night as he opened it and pretended to play a quick song, and again as he checked things over today, telling me how much he loves it and how wonderful it is.  It was a thoughtful gesture, one that again shows how lovely John really is - we should be bringing him gifts rather than the other way around.  I’ll write about this and his message for Gabriel sometime soon.  For now, our energy is in getting to and through Thursday.