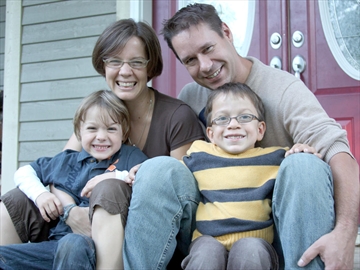 CAMPBELLFORD — Andrew and Ellen McFadyen are great examples of the lengths parents will go to for their children.

Their son Isaac, now 6, was diagnosed with MPS VI at the age of 18 months, an extremely rare disease caused by an enzyme deficiency. Since then, the couple has successfully lobbied the government not only to bring the previously-unavailable therapy called Naglazyme to Canada, but also to pay for the expensive treatments, which can run anywhere from $300,000 to $1 million per year. They also founded the Isaac Foundation to raise money in support of ongoing research into MPS, which currently afflicts only five known individuals across the country.

“Because it’s ultra-rare, it makes it hard to lobby governments,” Mr. McFadyen explained, noting a lack of data and studies due to the small population of affected individuals hampers efforts.

“Today we are happy we have that treatment. We call it his lifeboat because it slows the progress of the disease, but it’s definitely not a cure. He has a lot of limitations still.”

Those limitations include not being able to lift his hands above his head, as well as ongoing heart issues and joint stiffening. Isaac’s growth has also effectively shut down, leaving him smaller than other children his age and he must miss one day of school per week to travel to Toronto’s Sick Kids Hospital for treatments, which constitutes a 12 to 13 hour day for him and the rest of the family, including younger brother Gabriel.

The Isaac Foundation has raised $240,000 since its inception in 2005 and is currently funding two research projects, one in New York and one in Australia. Similar projects typically take between 15 and 18 months to get off the ground and the McFadyens try to get out funding as quickly as possible.

“When we receive a proposal, it’s sent to our Medical Advisory Committee right away to evaluate whether or not it has merit,” Mr. McFadyen explained.

“It’s typically one month to at most two before they have their funding. We often feel like we are racing against time with this disease and getting the money out quickly is important. We want to make sure those projects that look promising get started as quickly as possible so they can have the most impact.”

Mr. McFadyen said the family is especially excited about the possibility of one of the research projects entering clinical trials within one year, with Isaac signed up to participate. That type of opportunity wouldn’t have been possible without the support the charity has received over the years, he explains, including public support from celebrities such as John Mayer and The Tragically Hip.

“We wanted to play a part in finding a cure for our son,” said Mr. McFadyen, who is also a full-time teacher, of the decision to create The Isaac Foundation.

“We didn’t want to look back and think we could’ve found a cure if we’d only spent more time on this. We throw everything we have into learning about this disease and finding a cure as a family. It’s definitely been a steep learning curve but when you have something as important as your son on your mind you just do it and you do it happily.”

The gala in Cobourg is one of the organization’s first events close to the family’s Campbellford home.

“We’re excited because we hope it will be a really incredible community experience,” Mr. McFadyen said of the gala, which will include an intimate performance from Ron Sexsmith and a silent auction that includes items such as a guitar signed by Isaac and John Mayer.

“This is our first event close to home and we always did that on purpose because home was supposed to be our refuge from all this, but we’re okay being at home and working on this. This event’s exciting because it will bring everyone together. We feel like we’ve been successful so far, but in the end we still haven’t found a cure for Isaac, and that’s the goal.”

The Gala For a Cure, featuring Ron Sexsmith, will be held Friday, Oct. 1 at the Best Western Inn and Convention Centre in Cobourg at 6 p.m. Tickets are $100, with a $60 charitable receipt and include dinner, entertainment and wine tasting courtesy of Black Prince Winery. Tickets are available by calling Ms. McFadyen at 705-632-0983 or visiting www.theisaacfoundation.com. They can also be purchased at Eclectic Mix in Warkworth and the Best Western or Mortgages For Women in Cobourg.